Editor’s Note: In Part I of this series (read it here), we learned the Performix Mixer’s centrifugal pump produces a highly streamlined water flow (i.e. high laminar flow). We also learned streamlined water flow is only a part (albeit an important part) of a process that ends with fully sheared drilling fluids. In Part II, we cover what happens to streamlined water as it encounters a narrowing in the pipe at the moment Bentonite is introduced into the water stream.

The Science Behind The Performix Mix System

Way back in the 16th century, two scientists studying fluid dynamics made what would, hundreds of years later, become the core science behind the world’s best HDD mud mixer.

This is known as the Venturi Effect, seen in the illustration below. 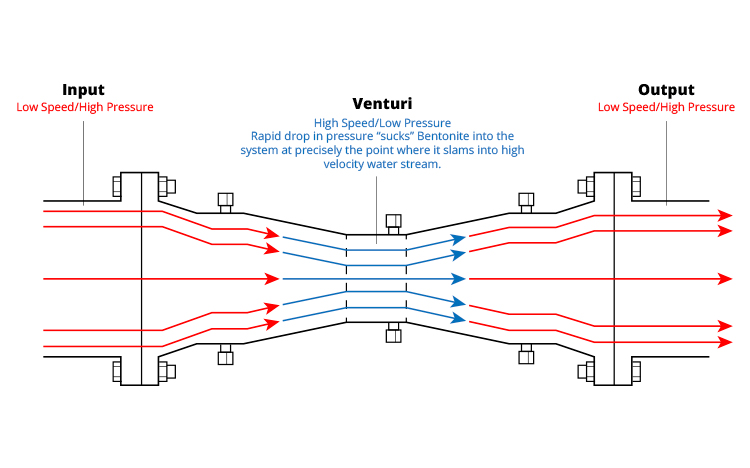 As high laminar flow fluid (i.e. streamlined) emerges from the centrifugal pump, it encounters a “choke point” – or Venturi Jet. It is at this point where the fluid undergoes a rapid change in speed, kinetic energy and turbulence. Additionally, rapidly changing water composition creates a corresponding drop in pressure –a vacuum.

For more details on the Bernoulli’s principle and the Venturi effect click here.

Together, the discoveries of Bernoulli and Venturi are key concepts in numerous industrial applications—particularly aviation and fluids transport.

Enough of the History Lesson. Tell Me Why I Should Care!

Here’s how the Bernoulli Principle and Venturi Effect are applied in the Performix Mix System. StraightLine HDD engineers incorporated a pump that produces a high laminar flow water (see Part I of this series here). This streamlined water flows into a “choke point” in the pipe. This choke point is called a Venturi jet. 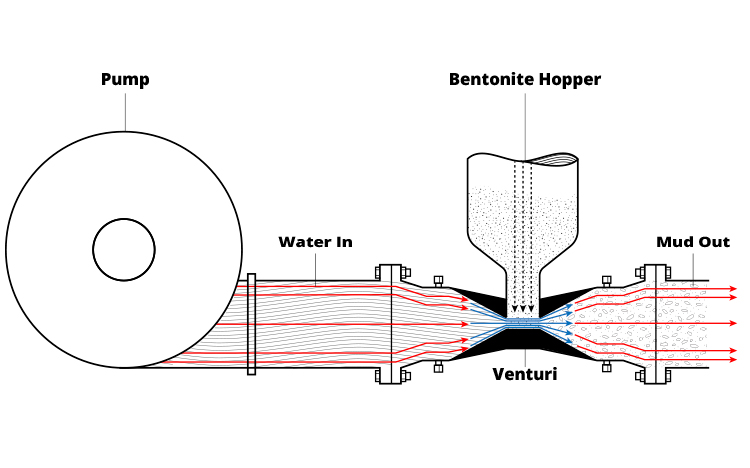 For users of Performix Mixers, the Venturi Effect is clearly observed by the speed in which Bentonite disappears from the hopper. The forces acting on the Bentonite are not just gravity (present in competitive mixers), but suction created by a sudden decrease in pressure created by the Venturi.

Locating the Bentonite induction port precisely at the point where the Venturi Effect is most pronounced, creates two powerful effects.

So, there you have it: How two “old” guys’ discoveries in the study of fluid mechanics played a critical role in making the Performix Mix System the absolute best in the world.