A major petroleum-transport infrastructure company was awarded contract to install a 215-mile connector pipeline. The 12-inch heavy-wall steel pipe was to link a processing facility in northeast Ohio to an existing pipeline in north central Ohio.

Subsurface condition surveys revealed bedrock comprised of Pennsylvanian and Permian-aged sedimentary rock, primarily shale, sandstone and limestone. A part of the Allegheny Formation, overlying the bedrock was a layer of glacial deposits consisting of clay, sand, gravel and boulders.

Beyond the challenging geology, the project kicked off under a public relations cloud created by an accidental discharge of nearly two million gallons of drilling fluid into a wetlands area. Although the spill occurred on an unrelated pipeline project by another contractor, continued media coverage created an elevated sense of urgency to control drilling fluids. 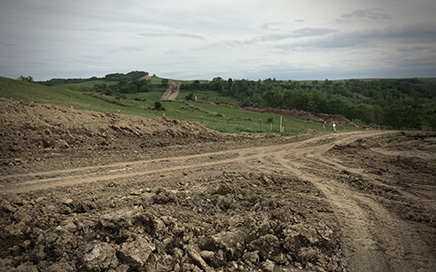 The first hammer shot on the 215-mile connector pipeline project occurred on a 300-shot through a rock formation that thwarted several attempts using conventional tooling. 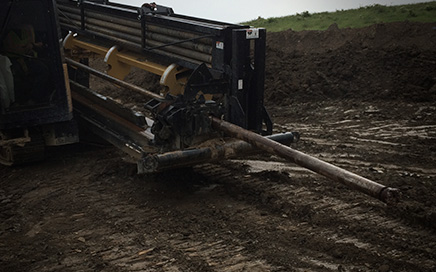 A Vermeer 80×100, outfitted with a RockEye 5.0 Hammer System, moves into place to attack the 300-foot limestone bore. 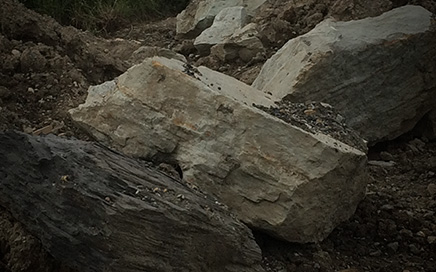 Part of the Allegheny Formation, to get into the limestone bedrock layer, the crew had to push through a layer of glacial deposits consisting of clay, sand, gravel and boulders.

The RockEye Hammer System, played a key role in completing two sections of the pipeline project; near the towns of New Philadelphia and Ashland. Conventional methods and tooling were initially specified on both bores. But, as is often the case with HDD, even meticulous planning, executed by seasoned professionals require “on the fly” adjustments.

With several successful bores under their belt, the veteran crew’s confidence was high as they arrived on the New Philadelphia site. That would change abruptly, on the short 300 foot shot. Steering was the core issue. 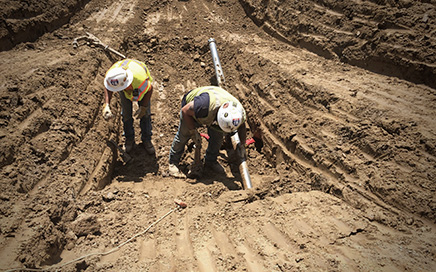 After punching the pilot shot, the crew prepares the first of two back-reams.

Entry angle was set at an aggressive -20 degrees, in order to achieve total depth of 12 feet, which included a minimum 4 to 5 foot clearance of three installed pipes. A tight easement, combined with the limited bend radius of the 12-inch heavy steel pipe, meant there was little margin for error in steering.  Problems emerged as the conventional rock bit moved from the clay/loam glacial till into the limestone.

Unable to effectively engage the rock, the tooling simply bounced off the rock.  After spending several frustrating days unable to stay on-profile, a crew member recalled watching a RockEye Hammer video on YouTube. Another crew member recounted witnessing a RockEye in action with a previous employer.

A call was placed to StraightLine HDD. Within days, StraightLine Field Engineer, Ron Becker arrived on the job site with a 5-inch RockEye in tow. Following setup and briefing, the hammer entered the ground mid-morning. Arriving at the point where previous conventional tooling deflected, the RockEye fully engaged the limestone.

The drill foremen summed it up best: “It (the RockEye) makes an impression.  Especially after you’ve spent a good amount of time without much to show; then this hammer comes in and immediately bites into the same rock we were bouncing off of the day before.  And then, with total control, finishes with ease.”

With the pilot completed, the crew set up for a two-step hole enlargement using 12- and 18-inch hole openers. Aware of the need to control drilling fluid, StraightLine Field Engineer Ron Becker took the opportunity to demonstrate one of the lesser known advantages of the hammer: using air rather than fluids on the back ream.

Running the compressor with a fluid flow rate of seven gallons/minute, both enlargement passes were completed in less than one day. “What the demo clearly showed,” observed the drill foreman, “was that air is a legitimate technique to minimize frack-out risk), while effectively transporting cuttings from the hole.”

Two weeks later and 50 miles to the northeast of New Philadelphia, another crew set up for a 450-foot shot near Ashland, Ohio.

Although less congested with installed utilities, the bore had its own set of challenges. 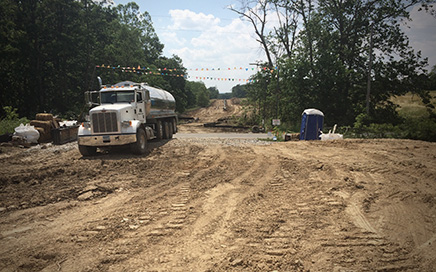 The second RockEye bore was the 450-shot through limestone.

The bore profile called for a 6-foot minimum clearance under a wetland area—and a total depth of 9 feet. With the entry positioned a short 40-feet from the water’s edge and considering the limited bend radius pipe, steering would again be a challenge.

The crew opted to lower the entry point by excavating a 7-foot pit. The crew calculated that lowering the launch point, when combined with rising topography on the exit side would make it much easier to navigate the alternating limestone layers and sporadic shale seams—and still stay within the bend radius of the pipe.

With a number of days remaining before taking delivery of their own RockEye Hammer (purchased following the successful New Philadelphia bore), the crew geared up with a three tooth rock bit. Ten hours of hard drilling netted 180 feet. However, lack of control placed the bore off-profile—negating most of the production.  The crew pulled back and re-fitted with second rock tool. The results were the same. After pulling out the crew moved to another pipeline section, while arrangements were made to bring in Becker and the RockEye demo hammer. 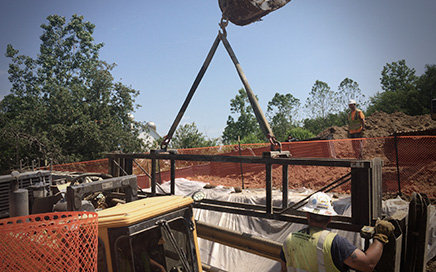 Positioning a new pipe rack on their Vermeer 80×100.

Three days later, Becker arrived. Moving 4 feet from the previous hole, in a half a day of drilling, the hammer reached the point where the previous traditional rock bore ended—this time, the bore was on-profile. Just as the crew began to entertain the possibility of finishing the 450-foot pilot in less than two days, the bore “Gods” intervened.

The hammer intersected a large void (likely made by the previous bore attempt). The rock caved-in, instantly pushing the hammer from a positive 4 to negative 2 and causing the hammer to bind. The crew, realizing navigating from the cave-in would violate the pipe’s bend radius, made the call to pull out. Moving the entry point once again, the RockEye engaged the limestone, achieving a consistent rate of production of 15 feet, every 20 minutes. Two days later, and without further incident, the RockEye hit a perfect bull’s eye on exit. Similar to previous segments, the crew executed a two pass hole enlargement in a single day—again demonstrating the effectiveness of air on the back ream.

As the crew prepared to move to the next job site, the drill foreman lamented: “The RockEye performed exactly as advertised—in fact, short of a mud motor—which was not an option on this bore—I  don’t think we would have gotten this thing completed without the RockEye hammer.”